The Thread of Life at St Augustine’s Priory.

September 2019 marks the eighth World Alzheimer’s Month, raising awareness of dementia, the condition which affects so many people worldwide and carries with it so much stigma.  At St Augustine’s Priory we believe in lifelong learning, utilising academic subjects and the opportunities they provide to open doors to a wider world in which our pupils will take their place as compassionate, community-minded human beings.

The depth of study which takes place here is exemplified by an Art A Level piece by former pupil Aneae Rodriguez in 2017 where the decline of her grandmother owing to Alzheimer’s is portrayed and demonstrates the profound love and understanding Aneae felt for her grandmother.  As a Catholic school, we treasure the quality of relationships.  This is instilled in its pupils from the first day of school and intentionally nurtured through their years here. 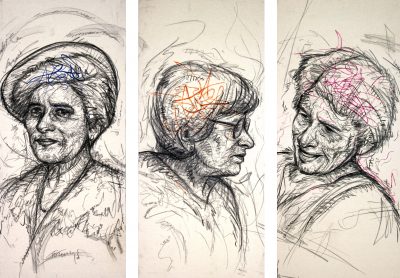 This art work takes the form of a triptych in chalk, charcoal and stitching.  In the first panel Aneae’s grandmother looks out at us with a firm, direct gaze, well-coiffed and elegantly attired in a dress and hat.  The only clue that all might not be well is the blue thread in her mind beginning to unravel, but still well contained.

The second panel shows the grandmother concentrating and focussed, her bearing not quite so upright and the orange thread of her condition expanding and becoming out of control, leaking into wider areas of her mind.

In the third panel the grandmother has a smile playing round her mouth, but her personality is not all it was, a mauve thread violently leaking and engulfing her whole persona.  She is now in a state of isolation, her mind being relentlessly stolen by Alzheimer’s.

This achingly beautiful work of art is a profound example of what happens when students are encouraged to explore very challenging circumstances through the Arts.

All aspects of well-being are taken seriously at St Augustine’s Priory.  Discussions take place with girls of all ages and Aneae’s work highlighting the effects of Alzheimer’s is used as a teaching aid, challenging girls to observe, to understand and to be aware of dementia, mental health and mental illness.