Women’s Wellness Week – What aren’t we talking about?

It is spring.  Yes, finally, green buds are appearing and whatever we have all made of this unusually bitter winter it appears to be ending.  At this time of year some people’s thoughts turn to their gardens, or interior decorating – but for me it is always a time to get big walking boots on and to go forth with a reasonably enthusiastic family on a lovely long walk over a hill and a dale and home for tea.

This time last year however, I was beginning to acknowledge that I wasn’t entirely well.  In a vaguely Victorian, “feminine”, malingering kind of way, I was losing energy. On a particularly fine walk in the Yorkshire Dales around Austwick and on a mission to walk to the Norber Erratics and beyond to Crummockdale,  I was so lacking in energy that my eldest son had to literally push me up hills.  Being feeble on a Northern piece of heather seemed interesting rather than worrying to an English graduate and rather than attend to it, I read more about those extraordinary Victorian women novelists who had so filled me with enthusiasm as an undergraduate.  Not only did the Brontës and George Eliot defy convention by daring to write as women about women but their lifestyles were challenging to the establishment.  What we take for granted in personal freedoms and liberties must never be ignored – we live as we do because of the sacrifices made by others who came before us.  We breathe freely because they dared to challenge every kind of corseted existence. 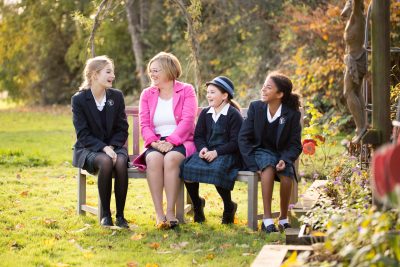 It turns out, however, that in daring to speak of some of the taboos constraining us as women in the 21st century we are not so very far removed from our 19th century sisters.  Our Head of Modern Languages, Mr Alejandro, gave an inspirational assembly to start our summer term where he outlined his motivation and journey towards running the London Marathon.  Along with wonderfully self-deprecating but honest reflections upon the pitfalls of ignoring physical signs of injury, which should be heeded, Mr Alejandro also spoke about the two charities for which he was raising money, Tommy’s and MIND.  As he powerfully observed, there are strong taboos around stillbirth, premature birth and miscarriage.  He pointed out that Mental Health disorders are also areas of silence, stigma and fear.

Indeed a theme has been emerging for us as a school.  Sadly, we often support parents who are seriously ill and one such example is one of our mothers who was being treated for cancer when her daughter joined the school.  She was diagnosed with choriocarcinoma – a rare form of gestational trophoblastic disease which is a cancer brought on by pregnancy. She took part in a trial of the drug, pembrolizumab, for which she had to fundraise.  Her story was recently profiled in Imperial College Healthcare Pulse magazine.  The GTF service at Charing Cross Hospital is a national service and one of only two hospitals in the country that treats the condition.  Our Lower V and Lower VI Science students will be fortunate enough to visit the laboratories this term to see first-hand not only the pioneering research but also to witness the breadth and depth of opportunities in the medical field generally.  They will meet Professor Seckl who will talk about current treatment and new developments.  Too many young people assume because they are good at science that this means becoming a GP – there is not enough exposure to the diversity of opportunities on offer for scientists and this is something we are addressing at St Augustine’s Priory.  Mrs Ransome has been instrumental in helping us to set up a wonderful learning opportunity for the girls both in terms of STEM careers, and in raising awareness of women’s health. This really is life-long learning.

My story is much more ordinary but has provided a platform for a much-needed consideration of how we educate girls about their health both now and in the long term.  It has also made me aware of a wider need for learning about the normalisation of chronic illness. 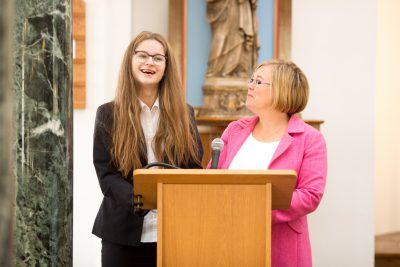 Last May I developed a pain in my hip, which meant that I was admitted to hospital.  There I was tested for various diseases.  The diagnosis, which followed, was blessed for me – nothing life threatening, but a radical hysterectomy was recommended.  Severe endometriosis and adenomyosis were responsible.  As I went off on sick leave, I told the school community there was nothing sinister and that I was having a big but routine operation.

I was not brave enough to simply say I was having a hysterectomy because I was contending with centuries of silence around anything gynaecological appearing in the public domain. The weight of that surprised me because I am not at all afraid of speaking out normally.

However, private conversations in the staff room meant that I discovered that too many colleagues were also going through what I was experiencing – and like me had soldiered on, never discussing the indescribable exhaustion, embarrassment and general myriad of symptoms which in my case the doctor had dismissed as stress.  Apparently if you tell a GP that you are Headteacher all physical symptoms are explained away as work related.  While Victorian death certificates of countless women give the cause of death as “exhaustion”, working too hard does not cause endometriosis.  Fibroids do not appear because of stress and the even lesser known adenomyosis is not attributable to anxiety.  In fact the scandal is that so little research has been done on these every day, chronic illnesses. But they are life limiting conditions.  Shrouded in dark clothes and existing on iron supplements, excess of spinach and voodoo we are all colluding in the taboo.

I am an English teacher by training but I have also taught GCSE RE many times over the years.  Year after year I tackled Mark’s Gospel, working in collaboration with a variety of wonderful colleagues.  One year (at another school I must add) we were joined by a male teacher.  He arrived one day in the staff room extolling the splendours of a lesson he had just delivered on one of the stories known as the Woman with the Haemorrhage.  Working in a girls’ school it had always seemed entirely natural that one of the stories in the syllabus should be this wonderful narrative about a woman who had bled for twelve years.  Until recently, I had not reflected upon how extraordinary it was that such a story should have been in the Gospels at all.

The story recounts how the woman, who is not named, has tried numerous doctors and they have all failed, indeed they had made things worse.  In desperation she joins the crowds following Jesus.  As a woman who dare not directly approach a rabbi, she contents herself with just touching his cloak.  She is healed immediately. In the story, Jesus can tell something has happened and turns and asks who touched him. 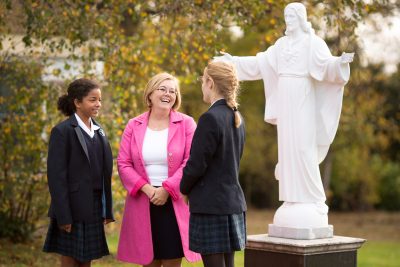 Jewish society, which was highly patriarchal, would have been shocked that a religious teacher like Jesus should respond to a woman who was in effect a pariah. In that society, menstruating women were unclean, unholy and untouchable.

The teaching point when exploring this story lies in the power of the taboo and is about the profound challenge to the convention and culture, which accepted and promoted it.  The extraordinary thing is that 2,000 years ago, a Jewish man directly conversed with, and healed, a woman whose position made her in every way unclean as far as his society was concerned.

The conversation in the staff room about this teacher’s lesson covered various matters and then after some time it emerged to our amazement that our good friend and otherwise entirely scholarly colleague had entirely avoided the whole point of the story of the haemorrhagic woman.  He had told the girls that she was bleeding from her brain.

I still experience the wonder of that moment when I looked at my colleague who had not felt able to discuss menstruation with girls in an academic context.  There was much to marvel at – we laughed an enormous amount at the time but we also challenged the life out of him – what was he afraid of?  What did it say about 21st Century Britain that a man could not discuss a story that appears not just in one but two of the Gospels?  What does it say that when I mention this story, many people still have no idea which Gospel story I am talking about?  And most excitingly, what does it say about those early Christians who conferred upon the Gospels and agreed that this story should appear both in Mark and Matthew’s Gospels? The Gospels as we now recognize them are a collection of narratives written by eye witnesses or men close enough to the events to have used eye witness accounts. In that highly male environment how did such a story get through the academic sifting to remain in the canon?  If this story could appear in two Gospels how was it that as the Head of a girls’ school in 2017 I felt uncomfortable saying I was having a hysterectomy?

In the end I wrote to parents and explained what had happened to me.  When the letter broke I could not have been prepared for the response.  Emails appeared thanking me for telling the truth.  Mums and dads crossed the streets of Ealing and hugged me, held me and rejoiced that something had been set free. Everyone had a story; mothers who were also midwives; fathers with wives or mothers or daughters who had lived with symptoms for years; colleagues with partners who work in this field. So many silences.  So many, many people with their own story to tell.  In the end so many people with energy to change the way we approach this conversation.

Out of these encounters emerged a desire to draw the stories of our community together as well as the expertise.   We are holding a Women’s Wellness week taking place the week commencing Monday, 11th June.  In it we draw on the networks of Mr Alejandro’s partner, Elizabeth Rafii-Tabar, who works in the Global Health Unit of the Royal College of Obstetricians and Gynaecologists as well as Mrs Ransome and many other generous women in our community.  Work experience will meet life experience.

Here is a flavour of some of the Activities being held at St Augustine’s Priory throughout Women’s Wellness Week:-

And the learning point? Notice when you are well.  Give thanks for wonders in life – it turns out my two children are miracles.  Don’t be a hypochondriac but don’t be fobbed off with quasi diagnoses of stress when there is something palpably physical going on.  Use your voice, your ears, your brain and trust your gut.  Use what influence you have – in my case the joy of leading a girls’ school with a group of students, staff, parents and governors who jointly represent so much knowledge and wisdom.

We are surrounded by incredible people.  This community really does more than just teach.  It nurtures dreams, seeks learning and endlessly resists oversimplification.  Women’s health is not about women in Amazonian isolation it is also about their wider relationships with their husbands, partners, with their parents and their daughters, their sons and, ultimately, themselves.