Upper IV and ‘The God Who Speaks’

Mrs Corkery, Religious Education teacher, reports on the recent Assembly delivered by Upper IV Alpha on the Catholic Bishops’ Conference of England and Wales theme for 2019 – 2020, ‘The God Who Speaks:  The Year of the Word.’:

‘Upper IV Alpha recently delivered a very insightful assembly to introduce the religious theme for the current school year: ‘The God Who Speaks: The Year of the Word.’

The girls drew our attention to an amazing insight on Scripture offered by the Catholic Bishops’ Conference of England and Wales. The bishops recently noted that ‘Scripture is at the centre of everything the Church does. The Word of God shapes our prayer and worship. The Bible shows us how to understand the world, how we are called to live and relate to each other. ’ Upper IV Alpha also mentioned Pope Francis’ important words regarding Scripture: ‘You are holding something divine in your hands: a book that is like fire. A book through which God speaks.’

The girls informed us that there are a number of reasons why the Catholic Bishops of England and Wales designated this year as the ‘God Who Speaks.’ The theme celebrates the 10th anniversary of Verbum Domini, Pope Benedict’s Apostolic Exhortation on ‘The Word of the Lord.’ Furthermore, it marks the 1600th anniversary of the death of St Jerome, who famously translated the Greek New Testament into Latin while living in Rome, and the Hebrew Old Testament into Latin while residing in Bethlehem. This translation was called the Vulgate, which has shaped the Catholic understanding of the Bible ever since. The girls delivered a humorous, yet thought-provoking  drama on important moments in the life of St Jerome.

Upper IV Alpha also noted that St Jerome, with the support of his friend St Paula, established many monasteries for men and women. Interestingly, he preferred to live alone in a cell in Bethlehem. Indeed, he spent four years as a hermit, praying and fasting in the Syrian desert, which is typically represented in many paintings of him.

The girls recommended that we visit the painting of Saints Jerome and John the Baptist by the Renaissance artist Masaccio, currently housed at the National Gallery in London. They certainly whetted our appetite for such an excursion by pointing out some of the symbolism in this fabulous work of art. It became evident that the artist’s use of light was a vehicle to communicate important insights.

We first explored how the light shines on the book in Jerome’s hand. The book is the Bible and, interestingly, the light crosses Genesis, chapter 1 to highlight the importance of this biblical story. In a subtle, but noticeable way, the light also draws attention to Jerome’s hands, particularly his fingertips, the vehicle through which his translation was written down. This may be the artist trying to represent that God inspired Jerome’s translation.

We also noticed that light emanated from the entrance to the miniature church in Jerome’s hand, perhaps conveying that the Church is a guiding light for humanity. We wondered why the Bible is positioned higher than the Church in this picture, learning that this may represent the importance of the Bible for guiding the Church. After all, the Bible is a key source for beliefs and values for Christians.

There was also a very prominent lion at the bottom of the picture. We learned from the girls that an image of a lion is often used in art associated with St Jerome to recall a particular legend whereby St Jerome was giving a lecture to his students in Bethlehem when a limping lion came to him. While the others fled, the saint welcomed the lion. He examined the injured foot and took out the thorn he found there. This cured the foot and the lion stayed with St Jerome until his death! 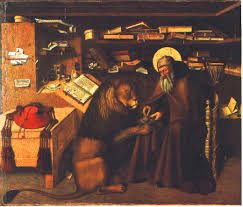 After the Assembly, we came away with the sense that Jerome had an amazing life, and we were not surprised that he was a key inspiration behind the theme of the Catholic Bishops’ Conference this year, ‘The God Who Speaks: The Year of the Word.’