Lower IV pupils Elodie King, Freya Ellis and Ionela Diaconu here share with us their experiences during their recent visit to Paris as part of our exchange programme with our sister school, Ste Marie de Neuilly. 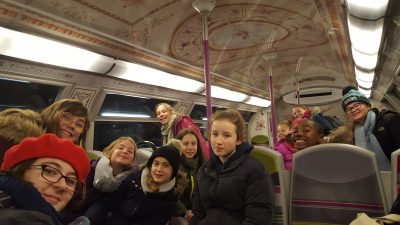 ‘From 30th January to 2nd February, we took part in the French exchange visit to Paris. Many girls were apprehensive at first, but we soon realised how friendly (and good at English) our penpals and their families were. Before the visit, most of us had the opportunity to contact our penpals. This really reassured us and gave us a chance to get to know our exchange students. This visit was definitely an incredible (and slightly nerve-racking) experience, for all of us!

After meeting at school, around 04:30 am (eeeek), we began our journey to Paris. We travelled on the eurostar and arrived at lunchtime. We then took the Metro to the school and met our penpals for the first time! Everyone was nervous but we soon started to break the ice and immerse ourselves (as much as we could) into the language. Our first afternoon in Paris was spent with our own exchange student. Many girls had the chance to do some sightseeing, others attended their penpals’ afternoon clubs and everyone learnt about French life and culture! We also had our first French dinner (a big worry for the picky eaters), but everyone was brave and many discovered new foods that they actually liked! We were all very tired and ended the long day with an early night. ‘Bonne Nuit!’ Who knew travelling could be so exhausting!? 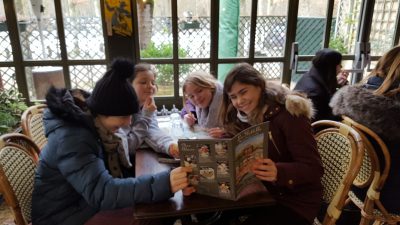 On the second day, we woke up at our penpals’ houses and made our way to school – some of us even took the metro or the tram. After an excitable reunion with our friends, we hopped on the metro at ‘Les Sablons’ and heading to Versailles, palace of French king, Louis XIV. After a short walk from the tube, we stood outside the massive golden gates of Versailles. There was snow everywhere making the place look like a majestic winter wonderland; we even had some snowball fights! We took a train tour of the massive gardens and saw many of the perfectly kept snowy hedges before arriving at a little hot chocolate cafe (even though it was cold, some of us still ordered ice cream). Then, we entered the palace itself; there were the most beautiful painted ceilings with intricate details and even some Roman gods such as Apollo and Jupiter. The most interesting room was probably the ‘Hall of Mirrors’ where one entire wall was covered in mirrors; there were also beautiful original paintings and furniture in each room. After a super fun day, it was soon time to head home and relax (or for some, head out back into Paris for some more sightseeing). We were so tired that we couldn’t wait to get to bed! 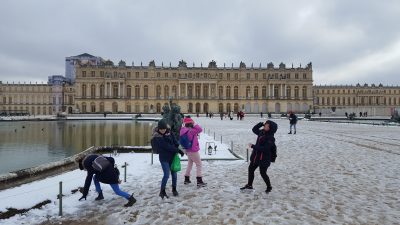 On the next full day, we began by spending the morning at our penpals’ school, Ste Marie de Neuilly. During this time, we accompanied them to their lessons; this was quite a challenge, as everyone in our penpals’ class were really excited to meet us and asked us questions (in French!) We had to try figure out what they were saying and reply in French as best as we could. Also, as you can imagine, the lessons as well were in French.  Luckily, we had Maths and English and were able to understand what was going on and join in with the class and solve questions but also help out the French students with some English.

After leaving Ste Marie de Neuilly, to go on a boat trip on the River Seine, we travelled to the centre of Paris by metro.  Compared to London’s tube system, the metro is a lot different: instead of using oyster cards, Parisians buy tickets for the metro. Once we arrived in the centre of Paris we went shopping for about an hour. We looked around souvenir shops and different types of shops you don’t usually find in London – Sephora, Forever 21 etc.

At around 1.00pm, we went onto the tour boat and enjoyed an hour long tour of Paris; whilst on the tour, we saw many historical buildings and sculptures , such as the Eiffel Tower, Egyptian Tower and many more, and we learned about the history of each monument and its importance to French culture. We then visited the Louvre, where Paris’ famous glass pyramids are situated.

On our return to school, our penpals were waiting for us to spend our final evening and night with them. That evening, we spent our time enjoying French cuisine, sightseeing and socializing with our French families! 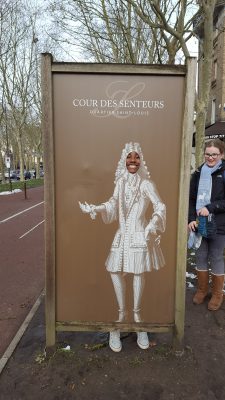 On Saturday (after a much needed lie in), we spent the morning with our French families. Some girls ate a delicious French breakfast, with croissants, pain au chocolats and many other French boulangeries. Other girls did some sightseeing around Paris, climbing the Eiffel Tower and even squeezing in some last minute souvenir shopping! We then all returned to Ste Marie de Neuilly to celebrate ‘La Chandeleur’ a tradition celebrated on the 2nd February every year. ‘La Chandeleur’ is celebrated with crepes, and we were lucky enough to try some with our families and friends at the school. Unfortunately it was then time to say goodbye and head home. After thanking our French families, we were on our way back to England, sad to be leaving but excited to see our parents again.

We were so lucky to have had this experience. It was nerve-wracking getting out of our comfort zone, however it was a brilliant visit that we definitely will not forget. It would not have been the same without all the teachers and parents who helped make it happen, especially Ms Gandi! We cannot wait for them to come and see us in May and hope they will enjoy it just as much as we did.’