We prepare for the Nativity.

The St Augustine’s Priory Carol Service, held every year at Ealing Abbey, is a wonderful way to prepare for the coming of Christ.  The evening of Tuesday 11th December 2018 was no exception.

We began the evening with a gathering of Association members in the Parish Centre.  Past pupils, former staff, Governors, Trustees and present staff joined together for refreshments and a chance to catch up before the service began. 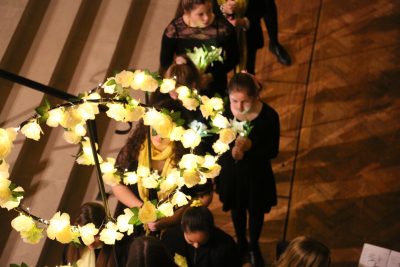 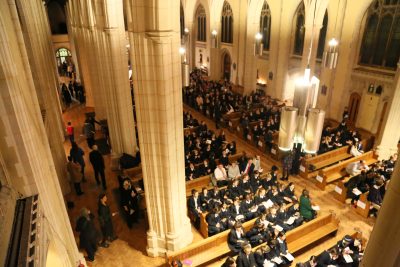 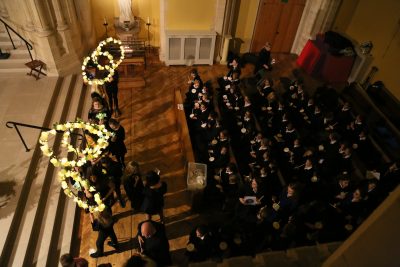 The theme of Motherhood ran through the evening which began with a procession in the darkened abbey celebrating the Blessed Virgin Mary with the bearing of her symbols of lilies and roses.  These flowers, beautifully made by the Art Department, were carried by girls and teachers named Lily and Rose.  The lily symbolises purity and conception; in portrayals of the Annunciation throughout history the lily is depicted positioned between the Angel Gabriel and Mary, enabling the artist to show the dimension of time – before and after the Annunciation of the Lord. The rose is the symbol of the Blessed Virgin as the Rose wherein the Divine Word was made incarnate.  This procession of flowers was followed by the candle-holding choirs, all the girls taking their seats in front of a congregation of pupils and their families and guests; Ealing Abbey, as every year, was packed. 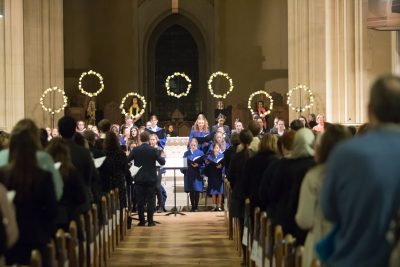 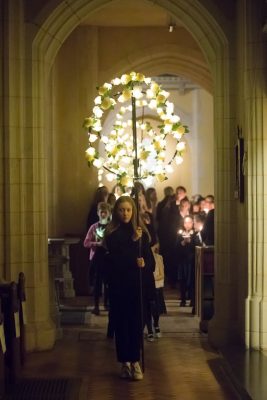 Fr Thomas opened the service with a prayer and then Kate Story, soloist, led us all in ‘Once in Royal David’s City’.  The musical programme was delicate and full of grace with elements of festivity and an underlying gladness which ran through the whole evening.  The soloists moved us all with their sublime voices and the choirs handled complex harmonies with skill and verve, delivering carols from the known to the rarely heard with a mastery that was joyful to hear.

The masterly Music Department staff, with Dr Higgins as its Director, delivered a musical extravaganza which combined moments of quiet and opportunities for congregation participation with favourites such as ‘The Angel Gabriel’, ‘O Little Town of Bethlehem’, ‘We Three Kings of Orient Are’, and, of course, ‘O Come, All Ye Faithful’. 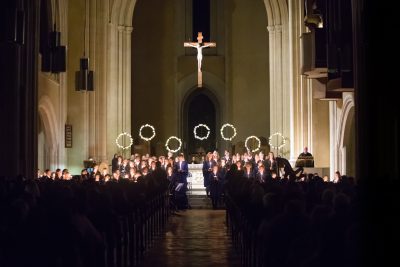 Representatives of years from Lower I to Upper VI delivered the Bible readings which interspersed the musical elements with a deep understanding of their texts and communicated the story of the Nativity with a clarity and poise which impressed. 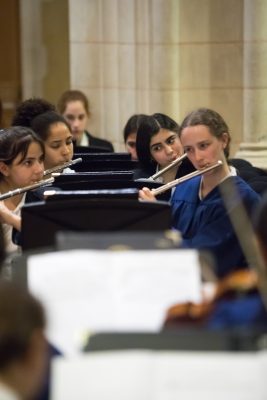 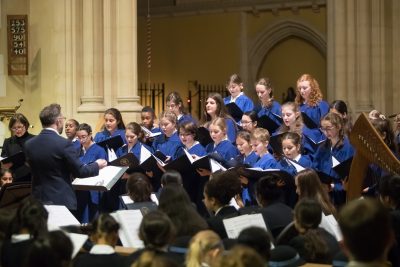 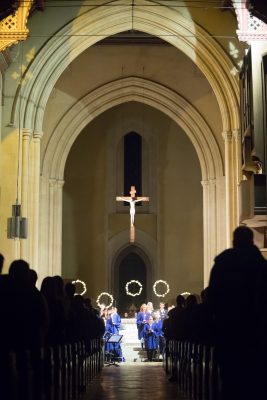 Fr Thomas ended the service with a Blessing and Mrs Raffray, Headteacher, thanked all who had participated in and prepared for the Carol Service and also the Abbot of Ealing, Rt Rev Fr Martin Shipperlee, who so kindly allows us to celebrate the Carol Service at Ealing Abbey each year.  Mrs Raffray then told us of this year’s Carol Service charities:  HCPT, The Pilgrimage Trust and StreetInvest and we are glad to announce that £1,138 was raised for these two charities – thank you to everyone for your generosity.

In all the helter skelter of preparations for Christmas, the Carol Service provides a golden opportunity of quiet and musical reflection on the whole point of our celebrations:  the Birth of Jesus. 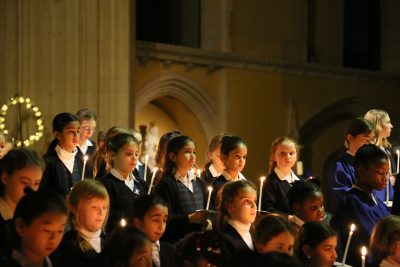 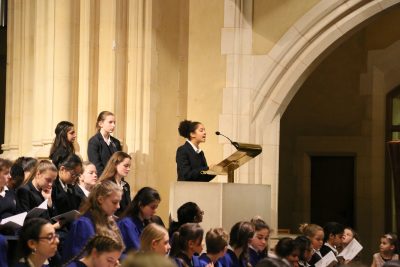 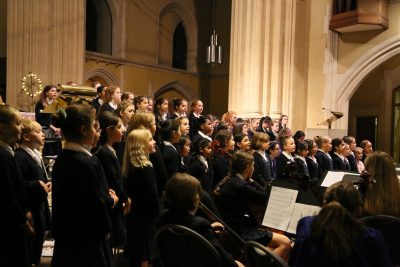