Just before Christmas we heard the wonderful news that Miranda in Prep III had won a Christmas writing competition, the Bramley Virtual Christmas Show children’s writing competition.   Mrs Foley, Prep III Form Teacher reports, ‘Miranda is a versatile, imaginative and fantastic writer and I am truly happy for her to win this competition, it is very well deserved’, while Miss Keane, Deputy Head Academic, Juniors, added, ‘I am very impressed with Miranda’s writing’.

The competition organisers had this to say about Miranda’s story, ‘The Magical Christmas Tree’, ‘I really enjoyed the idea of magic Christmas trees…. If you are able to write a story like this at your age, you show great promise for the future… Keep up the writing!’

We are delighted to produce Miranda’s story here.  Many congratulations!

It was Christmas in London.

Everyone was preparing for it.

That night they went to bed wishing for their presents. Then Emma was woken by a loud BANG! And so was Tommy. So they went downstairs. They noticed that sparkles were coming out of the Christmas tree. It was magic.

They saw the tree popping out presents, then the tree started to multiply. ‘Oh No!!’ Emma cried. ‘We can’t let anyone find out about the trees or we will be in big trouble!’ Tommy said. They ran to the door, but it was too late. The trees had just already gone out the door. They ran after them. They got so tired of running that they could barely move. 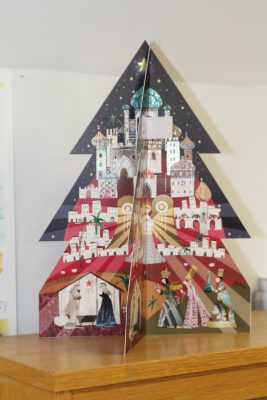 Santa was riding on his sleigh when the children saw him. They begged him for a ride. Santa let them on and asked what they were doing down there. They explained the whole story. Santa said that those trees have been misbehaving for centuries.

‘Come on kids’, said Santa. ‘Let’s go to my workshop, there might be a spell to get the trees’. So they went.

They were fascinated by all the stuff Santa had in his workshop. Suddenly they found the perfect spell book. It said:

Be good, be good

or you’ll be vanished from the neighbourhood.

So make your choice.

They put the spell book away in a case and rushed after the trees. By now they were probably twenty. They did not know where to find the trees. They looked in Asia, South America, North America, Europe and Antarctica, and also didn’t forget Africa. They found it in another continent and it was Australia.

When they got there were an awful lot of trees. ‘Are we going to have to count all of those trees?’ Emma said ‘I am afraid so’ said Santa ‘Awwww’ moaned Tommy. 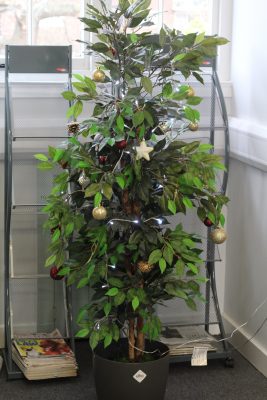 They split up to look for the trees. They checked and checked (although Santa was naming them instead of checking, and he named one Rudolph), but there was no sign of the trees. Suddenly they heard a loud snoring. It was coming from twenty trees that were too close together. So they crept up steady and quietly, and of course quickly. Emma had a giant net prepared, Tommy had the spell book open so that Santa could read the spell book. Then Emma caught all twenty trees in one go, and Santa said his spell:

Be good, be good

or you’ll be vanished from the neighbourhood.

So make your choice.

The trees weren’t able to stop themselves from saying their choice, and they all chose to be good. ‘That’ll do them good’ said Santa.

Santa dropped them back home. ‘Goodbye Santa! We hope that we see you again some time!’ Emma and Tommy shouted.

That was a long night. The next day they eagerly unwrapped their presents. Emma got a necklace that you could open that had a picture of Santa. Same for Tommy, but it was a watch.