Maths:  No Paper and No Electricity Days.

Creativity to the fore!

Mrs Bennet, Head of Mathematics, decided to go all out in support of No Electricity and No Paper Days on Tuesday 18th Wednesday 19th June.  Here she relates her activities!

‘The summer term at St Augustine’s Priory usually features a no-paper day and/or a no-electricity day and 2019 was no exception. So, during half term, on a day when my internet service provider accidentally managed to disconnect the whole of my street from their broadband facilities, I was left to read books in my garden, (without any fear of emails requiring action), and to ponder what we might do for this year’s event. 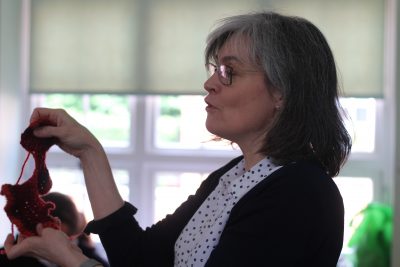 Rather than dwell on the difficulties such days present, I mused over how the Babylonians and other ancient civilisations (who were certainly very skilled mathematicians) managed without such essentials as electricity and paper! I briefly considered the option of looking at cuneiform tablets baked as biscuits, but everyone knows I’m not keen on crumbs in the maths rooms!

Turning to the superb book ‘Alex’s Adventures in Numberland’ I realised that non-Euclidean geometry is absolutely perfect for a no-paper day. What could be better than exploring a concept that simply cannot be done on flat surfaces such as paper? 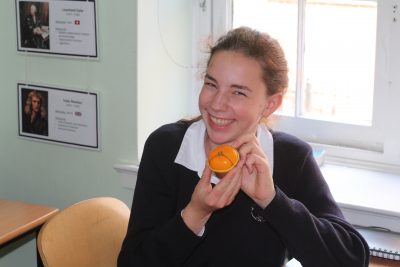 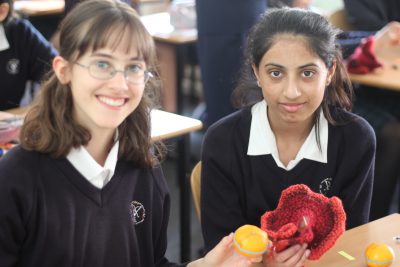 Euclidean geometry involves the sorts of concepts that most of us are familiar with – triangles drawn on paper cannot have two parallel sides (because parallel lines don’t meet, and therefore there would be no third vertex). But on a curved surface those rules do not apply. Imagine lines drawn on the outside of a sphere, from the equator to the North Pole. Two such lines meet at the pole, intersect the equator at 90 degrees, so you would think they are parallel, but they meet. A spherical surface has positive curvature, with no edge. Much, much harder to imagine is a surface with negative curvature with no edge. Negative curvature creates a hyperbolic surface.

A Pringles crisp has a hyperbolic surface, yet it clearly has an edge. How can a continuous hyperbolic surface be created or imagined? This was a problem that perplexed mathematicians for many years until, unbelievably, Daina Taimina (a maths professor at Cornell University) created one using crochet. So, sitting on my hammock in my garden in half term I decided that now was the time to learn basic crochet. I know how to knit, but crochet was new to me, but actually it is incredibly easy at a basic level. Hyperbolic planes seem to be one of the easiest things in the world to crochet!  Lower V pupils would certainly need to watch a short video before

creating such a masterpiece, but it was definitely worth a go (but not on no electricity day!) I also decided that small satsumas or apples would be perfect for them to look at spherical geometry and the nature of parallel lines.

We had tried sewing linear graphs two years ago, but had struggled a little with threading needles, which was an unnecessary distraction from what we were trying to achieve.

So this year we have upgraded and created threaded graphs on giant gridded fabric (the joys on the internet search facility!) but using drawing pins and backing grips rather than sewing the wool through the material. 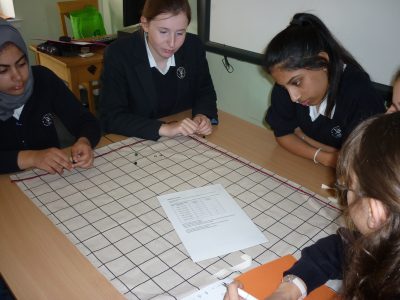 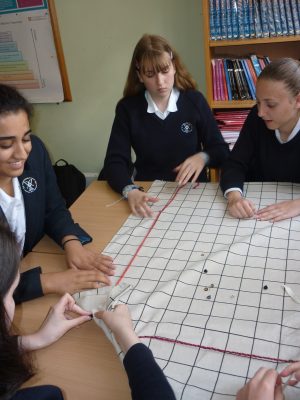 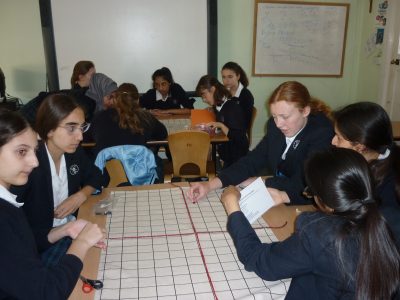 Whilst it would have been nice to create some sewn quadratic graphs, the natural curves of these lines are not well suited to our basic sewing. So instead I came up with four distinct graphs that could be well represented with straight lines, and pins:

The class was divided into four different groups each with a different task to complete on the giant fabric.

More non paper ideas came to mind – Mobius strips with double sided ribbon (different colours on each side) would be a beautifully simple demonstration of interesting topology. But sourcing the double sided ribbon had to wait until broadband was reconnected! The class would be required to hypothesise about what they expected to happen when the Mobius strip was cut, and whether having more than one twist would affect the outcome.

Semaphore with flags could be used to transmit messages across the astroturf, or the meadow; morse code could be used with torches (although batteries would count as electricity); the possibilities are endless! 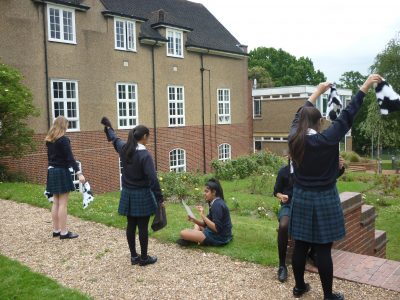 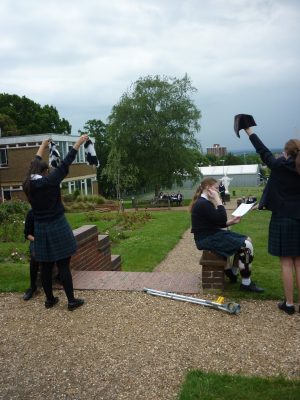 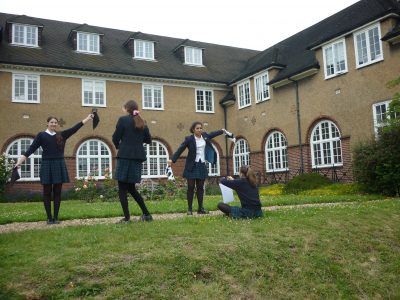 When forced to think outside the box, we can do so much more than adapt as best we can – embrace the challenge and be innovative.

It is true that non-Euclidean geometry is not part of the GCSE syllabus, but we don’t just teach to the test here.