Lower VI has not let the grass grow under their feet.  In today’s remote learning lesson (24th March), Mrs McDermott, Head of R.E., gave them a mission to research and write about Pax Christi, the international organisation which works for peace based on the gospel.

Over the last half term Priory 6 has been looking at pacifism and the Christian attitudes to war in their general R.E. lessons.  They have researched Blessed Franz Jägerstätter, the World War II Austrian conscientious objector, who was executed for his beliefs; Bert Brocklesby, the schoolteacher and Methodist lay preacher who was a conscientious objector during World War I and Fr George Zabelka who was a Catholic chaplain with the U.S. Army Air Force and was assigned to those units that dropped the atomic bombs on Hiroshima and Nagasaki during World War II.  He later came to the conclusion that ‘Jesus was nonviolent and taught nonviolence as his way’.

Jasmine, Angela, Charlotte and Naomi conducted their research on Pax Christi with a view to examining what Pax Christi does, what Christian values underpins it and why it is important today and here is their report:

The Pax Christi International website declares its mission is “to transform a world shaken by violence, terrorism, deepening inequalities, and global insecurity.” It was founded in Europe in 1945 as a reconciliation movement bringing together French and Germans after World War II. Today, the movement has 120 Member Organisations active in more than 50 countries worldwide, made up of both national and local groups.

Pax Christi believes that peace is possible and that vicious cycles of violence and injustice can be broken, it addresses the root causes and destructive consequences of violent conflict and war. The movement does this by: facilitating growth and integration of the international movement (networking), coordinating the global movement on the international stage (advocacy) and by building capacity of member organisations for nonviolent peace work (capacity building). 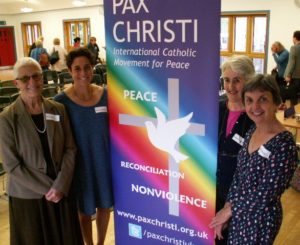 Their work is based on the gospel and inspired by faith. Their vision is of a world where people can live in peace, without fear of violence in any form. Pax Christi is rooted in Catholic Christianity but is open to all who share its values and work. Pax Christi works to support teachers, chaplains and youth workers in promoting a culture of peace in schools and amongst the younger generation. They develop solidarity between people who are working non-violently for justice and peace; they do this through joint actions for peace in Israel-Palestine and host events to encourage international efforts to abolish nuclear weapons and by celebrating the life and witness of peacemakers. They promote an understanding of sustainable security where human needs are met and the environment is protected, rather than seeking security through weapons and warfare. Pax Christi also campaigns against military spending, the arms trade and nuclear weapons as it believes that violence should not be tolerated.’