Mrs Brown, Head of Drama reports on the latest visit of the Lower V Drama group to see the Shakespeare Globe’s production of ‘Emilia’ an innovative and exciting play about a poet from the 1600s.

‘On Wednesday 15th May a group of the Lower V Drama GCSE students went to the Vaudeville Theatre to see ‘Emilia’. Morgan Lloyd Malcolm’s play has transferred from the Globe and is about the seventeenth-century poet, Emilia Bassano Lanier.

The Globe’s website says, “400 years ago Emilia Bassano wanted her voice to be heard. It wasn’t. Could she have been the “Dark Lady” of Shakespeare’s sonnets? What of her own poems? Why was her story erased from history?
Emilia and her sisters reach out to us across the centuries with passion, fury, laughter and song. Listen to them. Let them inspire and unite us.
Celebrate women’s voices through the story of this trailblazing, forgotten woman.
Stand up and be counted.” 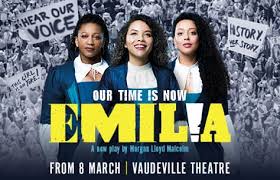 At St Augustine’s Priory we plan to perform scenes from ‘Emilia’ for a component of the Drama GCSE. It was an unusual and refreshing to see such as play, brimming with unabashed feminist rhetoric, spoken by a diverse all-female cast, in the West End. Emilia was one of the first published female poets, and a possible muse for the ‘Dark Lady’ of Shakespeare’s sonnets. She provides a path to explore the centuries-long silencing of women, the oppression they have faced – and still face today. The protagonist has been cleverly split between three actresses at three stages of Emilia’s life. 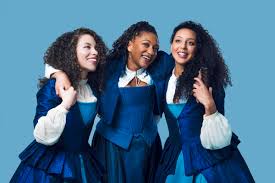 Lloyd Malcolm’s blend of Elizabethan and contemporary phrases, albeit wrapped up in merry slang, underlined that gender disparity is still an on-going issue. The students particularly enjoyed the audience interaction. We had characters come and sit amongst us as if attending a production at The Globe and washerwomen throwing laundry and bloomers over our heads. The combination of comedy, dance, song, and sincerity made the production thoroughly entertaining and the talented cast received a standing ovation at the rousing finale.’