Mrs Cattigan reports on some Marvellous Mathematics as three Lower II girls (Enya McDermott, Sasha Ike and Sachika Usami) have been invited to attend Primary Maths Masterclasses organised by the Royal Institution. These hands-on, interactive sessions are led by talented and enthusiastic volunteers from education, academia and industry.

‘In the first week, the girls learnt about anamorphosis and how it is a technique for transforming pictures. They looked at examples of how anamorphic art is used in the real world. They watched some TV footage of a football game where the advertising appeared to be 3-D on the pitch, but the players were running over them! They realised that it all depended on the camera angle or ‘perspective’ of the shot. They then drew some zig zag lines around the base of a 2-d template of a cone which became a square once you made the cone. Finally, the girls drew the initial of their first name onto a special anamorphic grid before using a cylindrical mirror to see the original image.’ 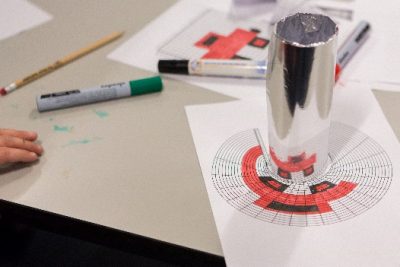 Enya McDermott writes about the second week where the children explored the famous problem ‘The Bridges of Konigsberg’ which introduced them to the delights of graph theory: 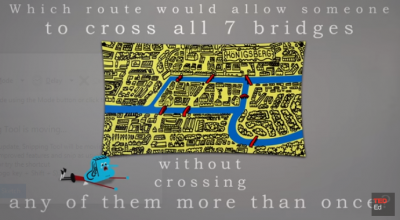 ‘I really enjoyed the warm-up of trying to make certain shapes without taking the pencil off the paper or going over the line twice or more. It was a real challenge! We then learnt how many arcs there were from each node (or bridge) and made our own node identifiers. Everything was really fun, but I especially liked trying to get out of the handcuffs!’