More great news from the Primary Maths Challenge.  Recently, we reported on the achievements of our Upper II Mathematicians in this annual nationwide competition aimed at children in Junior schools.  Now we can report on the achievements of girls in Lower II, who have been awarded certificates within each year group to those who achieved the highest marks.

Gold certificates have been awarded to Luna, Lucia and Lana with Silver going to Elisabeth, Arianna, Anna, Sophia and Angela.  Those awarded Bronze certificates are Tara, Sammie, Alexa, Haruka and Yasmin.  Many congratulations to all those who took part, what a wonderful achievement! 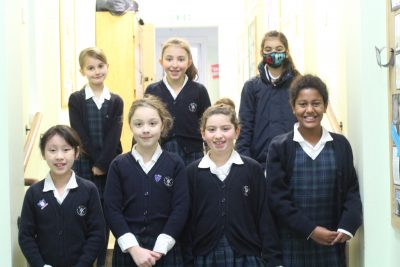 In addition, we recently heard news of former Senior pupil Maki Mazinoe.  In March Maki (then in Lower V) qualified for the most prestigious UK Maths Challenge competition, known as the Maths Olympiad.  This is a two hour paper, with just six questions, requiring full written solutions.

Then Maki returned to Japan with her family just before the competition was to take place.  After consultations and discussions with the organisers, Maki was allowed to take the exam in Japan, with arrangements put in place for invigilation, and submission of scripts.

Then lockdown happened and the University of Leeds (responsible for marking these incredibly high level questions) closed, with scripts locked away.   Eventually after reopening, the scripts were marked, and it was with huge delight that we read the email telling us that Maki had achieved the highest possible award, Distinction.

We are enormously thrilled for Maki, who has already responded from Japan saying,

‘Thank you so much for organising this for me and letting me take part! It was the last but the best Maths Challenge I’ve ever done!’

Congratulations to Maki on her outstanding achievement!