Looking forward to the visit to Ste Marie de Neuilly in Paris at the end of January 2019 we look back to the French play performed here for the seniors on 12th November.  Immersion in the languages studied at St Augustine’s Priory is so important and, through visitors such as those who performed the play, visits to the countries whose languages we study and film nights where foreign language films are shown, girls gain a greater understanding of and fluency in the languages they study.

Beatrice Robertson, Form III, informs us, ‘On Monday 12th November, Form III, Lower IV, Upper IV, and the GCSE and A Level  language students watched a French play performed by two actors from France.  The play was based around the actors completing a series of tasks with the help of some audience members. The actors played a man and a woman trapped in two separate places:  one in an old explorer’s tent and the other in a pyramid.  Some of the tasks they had to complete were the reading of pictures on a wall and the reading of the numbers in hats. The whole point in these tasks was so the man and woman (who were brother and sister) could be together again. Although the play was in French we could understand it through use of body language and facial expressions and vocabulary we already knew. The play was really funny and enjoyable and I learnt lots of new words – and I enjoyed watching my friends get up on stage and have a go!’

Rya Vydelingum, also in Form III, continues, ‘The senior school recently gathered together to watch a French play called “La Salle des Enigmes”. The play was about two teenagers called Marie and Jeremy and their adventure trapped inside an Escape Room.  During the play, some of our St Augustine’s Priory girls had to help Marie and Jeremy escape by trying to solve the different puzzles that were dotted around the room. 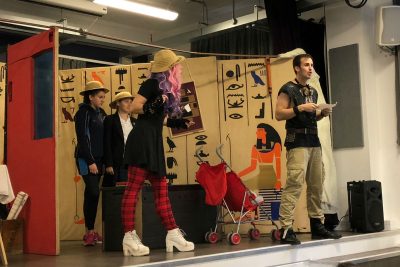 Through seeing this play my French vocabulary has improved and every time a puzzle popped up, I had to rack my brain! I really enjoyed this play as it was very interactive, funny and thought-provoking!’