As part of our mission to encourage girls to be ambitious in a happy and nurturing community, guests are regularly welcomed to the school by the PE Department in order to spend time with the pupils.  Last academic year saw role models such as Hannah Macleod, English field hockey player, and Maggie Alphonsi, English Rugby Union player, advising and inspiring the girls on their visits. 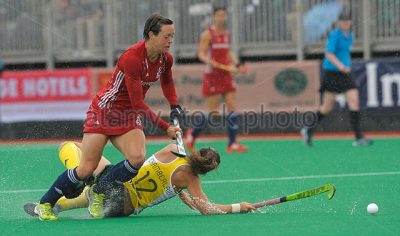 Macleod and Chamberlain competing in 2012

On Wednesday 6th September, Dirkie Chamberlain, South African field hockey player, came to run sessions for our Senior School pre-season hockey training.  Dirkie began playing hockey when she was fourteen and competed in the 2012 Summer Olympics with the South Africa women’s national field hockey team in the women’s tournament, as well as at the 2010 and 2014 Commonwealth Games. She currently still plays on the international circuit and for her local club here in London.

Over one hundred Senior School girls trained with Dirkie on Wednesday, including our brand new Senior girls in Form III.  Naomi Nnatu described how Dirkie ran a carousel during their hockey training, whereby different age groups took turns to learn different skills, such a slap hit, which can be used quickly without changing your grip.  The girls felt inspired by the fact that Dirkie overcame breaking her foot and then having the strength to retrain for such an energetic sport, and were left with some sound advice; “always ask lots of questions”.