Last night, Thursday 25th March saw the culmination of a musical event that has been taking place amongst the Seniors over the past few weeks.  This was the Gala of the Music Competition. The heats took place over several lunchtimes and those chosen performed yesterday evening in the Chapel in front of several members of staff and was streamed live on YouTube so that families were able to watch and enjoy.

Dr Higgins and the Music Department delivered a wide variety of music, from musicals to classical music to a student’s own composition. The resulting concert was a medley of mellifluousness!  Our Head Girl, Ljilja, introduced the concert and asked us to note that the music played at the beginning was a composition by Homare in Form III. 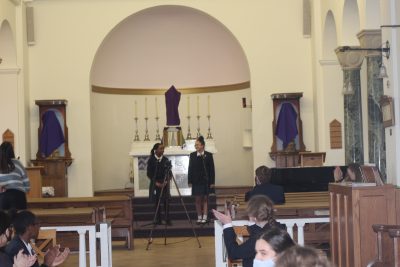 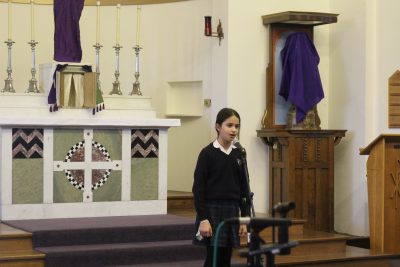 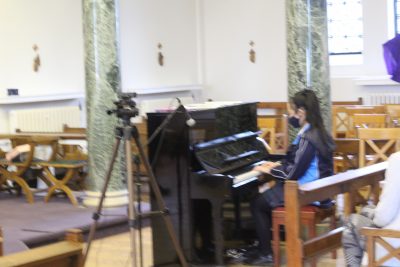 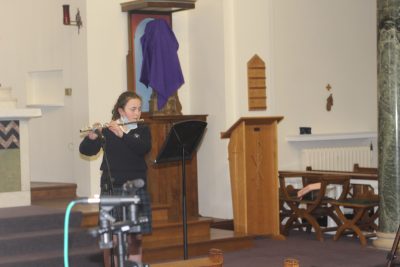 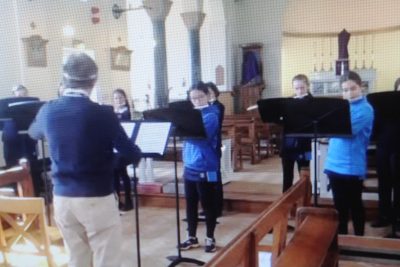 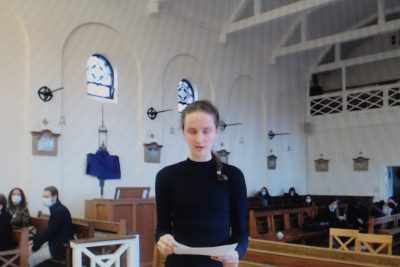 This was followed by the Flute Group playing a special arrangement of Fauré’s Pie Jesu.  This was dedicated to the memory of those who have died from Covid-19, and to their family and friends who grieve for them, together with those who have survived Covid-19 but are still living with the effects of this disease.

There was a wide variety of instruments played and several vocalists throughout the concert.  Ljilja introduced the Form III winners, beginning with Anaya and Esinam singing ‘A million dreams’ from ‘The Greatest Showman’ which provided a moving and beautiful first concert piece, followed by Lara on the piano playing ‘Plauderei’.  Arianna then sang ‘Feed the Birds’ from ‘Mary Poppins’, a haunting song loved by so many.

Following the Form III winners, Roza introduced the Lower IV winners.  Regine began this section of the concert with a piano piece, ‘I giorni’ by Einaudi, and Holly followed on the flute with ‘If I were a Rich Man’ from the musical ‘Fiddler on the Roof’.  Another pianist, Natalie, followed with ‘Nuvole bianche’ by Einaudi and then Eve played the Concertino in D on the violin.  A duet followed with Isobel and Stella playing the ‘Hornpipe’ on the piano and violin and Lucia ended the Lower IV section by playing the piano and singing ‘The Journey’, a song composed and written by herself.  She commented, ‘‘I composed the score and the lyrics, and I got the inspiration during lockdown. It is about the difficult journey through this pandemic.’ 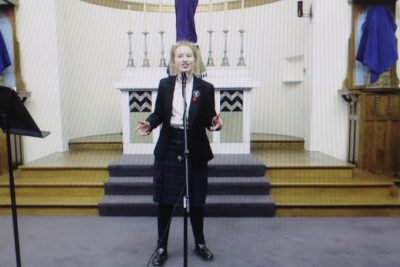 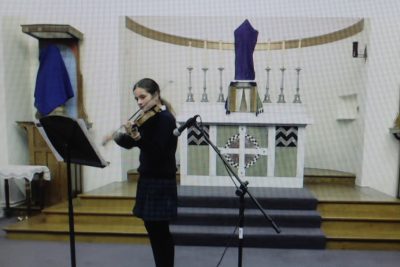 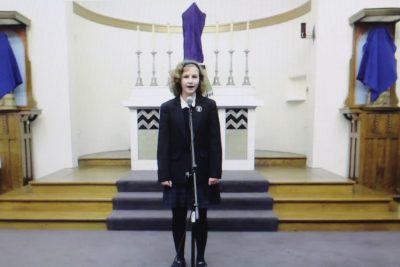 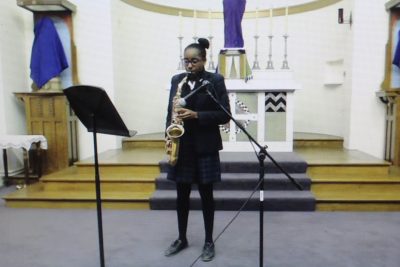 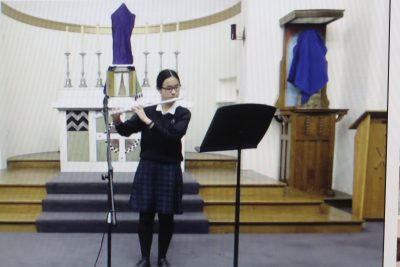 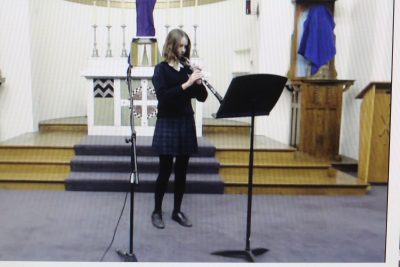 Naomi thanked the Lower IV contributors and then introduced another piece played by the Flute Group, the ‘Pizzicato Polka’ by Strauss.  She then introduced the Upper IV performers.  Gabriella began this section by a vivacious rendition of ‘Rollin in the deep’ by Adele.  Alexandra followed this by playing ‘Souvenir de Sarasate’ by Potstock, on the violin.  Roza ended the Upper IV performances by singing ‘Till there was you’ from the musical, ‘The Music Man’.

Alexandra congratulated the Upper IV performers and then introduced Lower V.  Kyra opened with a wonderful saxophone piece, the ‘Foxglove Swing’ by Steven Edis and this was followed by Sophie played the ‘Allegro’ by Bach on the flute. Isabelle followed this with a piece on the oboe, ‘Siciliana’ from the Concerto in C minor by Domenico Cimarosa.  Violinist Carlotta complete the Lower V winners by playing the ‘Scherzo’ from the Sonatensatz by Schumann, Brahms and Dietrich. 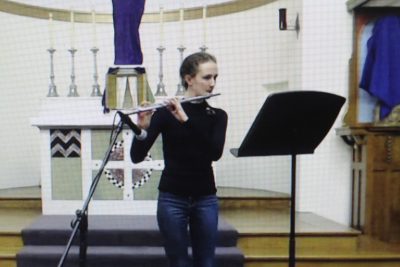 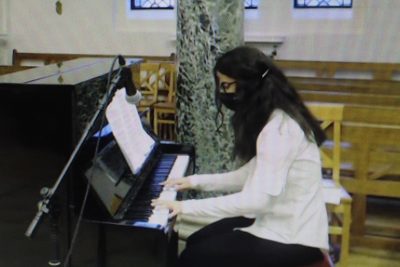 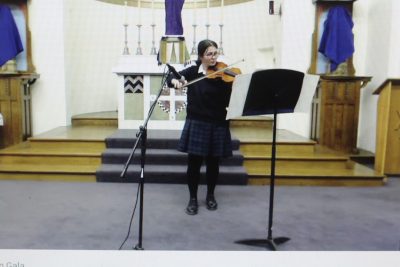 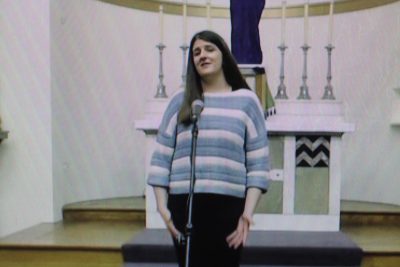 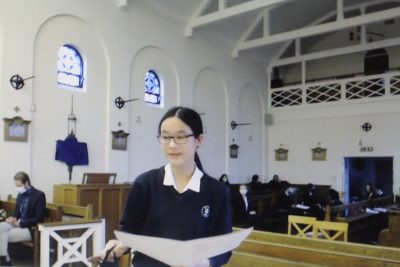 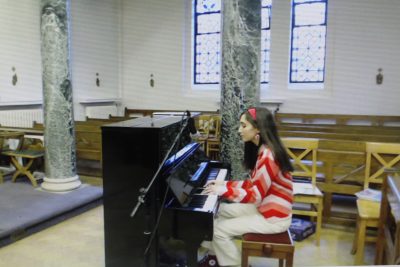 It was now time for Sophie to introduce the Upper V and Upper VI Gala winners.  Grace began by playing the piano and singing ‘Drivers license’ by Olivia Rodrigo.  This was followed by flautist Naomi playing the ‘Sonata for Flute’, first movement, by Poulenc and then pianist Taline played the Elegy ‘In Memory of Khachaturian’ by Arno Babajanian.  Our Head Girl, Ljilja ended this most beautiful concert by singing ‘And I will follow’ by Jason Robert Brown.

Mrs Raffray ended the evening by paying tribute to all those who had entered the Music competition together with those who had appeared and contributed to this wonderful evening.  Dr Higgins, the Music Department, our I.T. Department and all the performers had delivered a most enjoyable and memorable evening of music.