Accompanying with an open heart.

‘Fr Eamonn is a Spiritan or Holy Ghost Father Missionary, originally from Manchester. A priest since 1980, he has extensive missionary experience, working with young adults, teaching theology and giving retreats. From 2006-2013 Fr Eamonn lectured in Systematic Theology at Tangaza University College, Nairobi, Kenya. He is resident at the Parish of the Holy Spirit in Manchester as Director, Spiritan Mission and Retreat Animation and Episcopal Vicar for Religious for the Diocese of Salford. So, this was a great opportunity for me to be taught about ‘Fratelli Tutti’ by such a renowned educator.

Fr Eamonn started by explaining the title of the encyclical, which is unusual as it is not in Latin but from the Medieval Italian spoken in Umbria by St Francis of Assisi. Not only is the title unusual, but it was signed, not in Rome, but in Assisi and was launched on the Feast of St Francis in Assisi. Despite these connections to history, this encyclical holds resonance and relevance for us today.

The title was immediately attacked for not being inclusive; ‘Fratelli Tutti’ translates as ‘All brothers.’ Fr Eamonn explained how Pope Francis chose this title as he wanted to remain faithful to the language St Francis used for his community of men and that throughout the rest of the text of the document, Pope Francis refers to ‘brothers and sisters’. The letter is a challenging read, so Fr Eamonn advised us to dip in and out of it and read it prayerfully.  He also told us that the Vatican has launched a website that focused solely on ‘Fratelli Tutti’ to enable people to engage with the content beyond the text itself. If you want to learn more about it, without having to read the longest encyclical ever, here is the link http://www.humandevelopment.va/en/fratelli-tutti.html

For me, the key points to highlight are that this is the first ever encyclical that draws on non-Christian sources of authority. Pope Francis quotes from Islamic teachings and refers to other interreligious documents within the encyclical. He also quotes from the various Bishops’ Conferences from every region of the world – it is a document that is universal. However, Fr. Eamonn pointed out that, unfortunately, the voice that is missing from ‘Fratelli Tutti’ is the voice of women. Pope Francis could have referred to examples of powerful women of change in the Church, such as St Clare of Assisi, Josephine Bakhita or Dorothy Day.

In the encyclical Pope Francis makes us realise that our reality is one of interconnectedness and with that comes interdependence. As inhabitants of our common home, we are all connected and Pope Francis asks us to open our eyes to see how this reality appears to be being destroyed by the increase in polarisation and the sense of individualism in our world. The encyclical starts with a litany of calamities. We need to think about what causes these calamities and how we can act now to do something to prevent our world from being destroyed. He really is picking up from where he left off in ‘Laudato Si’. ‘Fratelli Tutti’ shows us a roadmap of light and hope through these calamities but we need to be attentive and look at the systems that are creating this brokenness. Pope Francis asks us to consider this throwaway world we now inhabit; the negativity and anger encountered on social media and acknowledge who are the victims of this. Pope Francis makes it very clear it is the poor who are the victims; they are getting poorer and they are becoming ‘throwaway-able’. 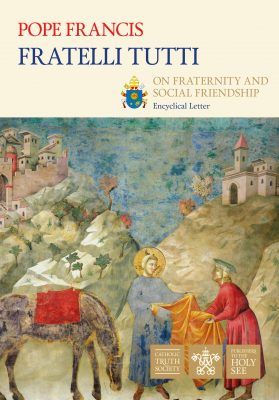 ‘Fratelli Tutti’ is an encyclical for now. Pope Francis writes about the COVID-19 pandemic and acknowledges this is written on the edge of the abyss but this crisis presents an opportunity for us, an opportunity to create a new world, to transform the world. We need to give life to social friendship. Mrs Raffray will be delighted with what Pope Francis says about the importance of dialogue! Fr Eamonn made us think about how, as educators, do we teach our students to engage in dialogue; how to ask questions and listen to the answers of questions they ask. I hope this is something our students experience here.

Another key message that we already promote in school that Pope Francis talks about is going against hatred on social media. Also connected to his points about social media is the fact that nowadays we are actually more alone than ever before. Loneliness is one of the calamities of the 21st century, so in order to counter this, Pope Francis asks us to be social poets and to reinvent political life. He even includes a profile of authentic politicians within the letter. He asks us all to adopt the virtues of tenderness and kindness in our lives. Pope Francis asks us to focus on building bridges because if we build walls then we become hidden, we cannot see the horizon if a wall is in front of us, we can’t see beyond ourselves.

At the heart of the encyclical is the parable of the Good Samaritan and it was such a privilege to hear Fr Eamonn teach the approach that Pope Francis adopts in the letter. It was the most amazing RE lesson for me to experience as a student! I learnt so much!  When we listen to the parable of the Good Samaritan, we think we know it so well that we might switch off but Pope Francis makes us think about the context of rabbinical teaching that Jesus was a part of. So, when Jesus tells the story he refers to predictable storytelling of first-century Judaism which started, ‘There was a priest, a Levite and an Israelite…’ But Jesus surprises his audience and uses a Samaritan as the third character, we miss this twist in the story as we are so used to the parable. Another new way of looking at the parable that Pope Francis invites us to do, is to consider which character we identify with. Pope Francis also makes us think about what makes the Samaritan ‘Good’; what does he give the injured man? Tenderness, time and money. In the encyclical Pope Francis identifies time as being the most precious thing he gives the injured man. This is something that really resonates with me; as a busy full-time teacher, mother, wife, daughter, sister, aunt, friend it made me reflect on whether I give my time willingly to those who need my time. Do I allow myself to be interrupted on my road when people need my help? 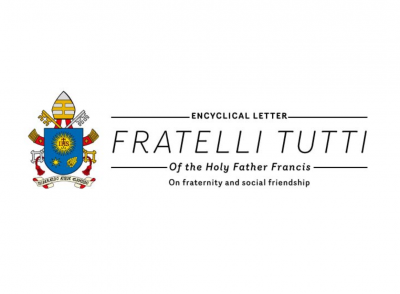 This encyclical is a rich addition to Catholic Social Teaching and is a revolutionary document which makes us think and act differently.’