A career in Public Relations.

On Thursday 25th January Daniel Cohen, a multi-award winning creative strategist, came to talk to Priory 6 and Upper V girls about his career.  Mr Cohen has worked with some of the best people across PR, digital and marketing in a career spanning 25 years with companies such as McDonalds, British Airways, Skype, Marks and Spencer and Diageo.  He has built three top-ten UK consumer practices – Harrison Cowley, Trimedia and Grayling. He also created Grayling’s digital practice (which went on to be ranked number one by PR Week), grew Atomic into one of the most renowned integrated agencies, as well as a top 20 B2B agency, and transformed LEWIS’ digital and brand practices across EMEA. Mr Cohen has also media trained CEOs to Government Ministers and shadowed Lindsay Lohan and Samuel J. 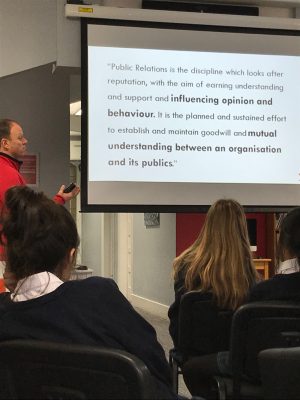 Mr Cohen has employed over 300 people in his career and knows what to look for in people who would be good at PR. He gave the students examples of the traits he looks for to help those who are thinking about their future careers to potentially recognise these qualities in themselves. Mr Cohen looks for people who always want to learn and can ‘be a sponge’ and never think that a job is below them. He also encouraged the students to ‘question everything but this statement’ and to ask ‘so what?’ when questioning the importance and meaning of things (although he advised not asking teachers this during lessons).

One of the important messages the girls took from Mr Cohen’s talk was that we need to be prepared to work hard to get to the top, which will mean for many people that they will need to start at the bottom of the ladder and work their way up, just as he did. He told the students how he did not get the best results at A Level and after university he went travelling for two years. When he returned to London he was unsure about the career he wanted to go in to but he found a job in a PR company with a starting salary of £11,000 where he was mainly responsible for photocopying. Within eight years he rose to be director of the company.

Another key message from Mr Cohen was to do what you love. He explained that he is the only one out of all his friends that still truly loves what he does.

He recommended a career in PR to those who have a particular interest in data, storytelling, sociology and psychology as these are all interwoven throughout PR. 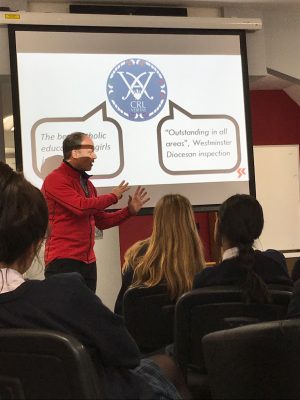