What is it to be an Augustinian?  Among other things, to love learning, to have courage and strength of character, to be true to oneself and to have respect for others and the wider community.

In PSHEE (Personal Social Health and Economic Education), which takes place regularly throughout the school term, Form III has recently been examining ‘The Meaning of Being a St Augustine’s Priory Girl’.  Here Form III writer, Sienna Masih, tells us about the experience and the aspects of being an Augustinian they all investigated.

‘Form III had an interesting PSHE lesson with Sixth Formers, Katya and Banu recently. The lesson was on ‘The Meaning of Being a St Augustine’s Girl’. During the lesson we did multiple different activities. One of the most memorable was squeezing a tube of toothpaste out of the tube and then trying to put it back in. However, as we all learnt: you cannot put it back in once it was out. It’s just like how you can’t take back words once they have been said. 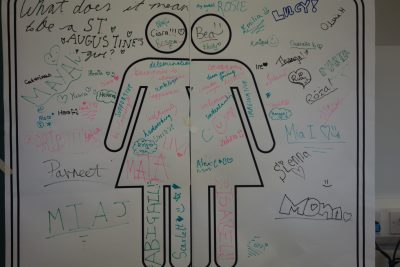 We also had a funny activity where we had to say mean words to one apple and nice words to another. Katya then cut the apples open and the one which we had said nice things to was lovely and white in the inside, but the one that we had said all the mean things to was horrible and bruised on the inside.

The third and final activity was Banu’s idea and we had to write down what it means to be a St Augustine’s Priory girl and the qualities we need to have. We all wrote our ideas on a big poster board in the shape of a girl then we signed it to show that we all contributed our ideas towards the activity.

After that Mrs Pugh said a few words about being a St Augustine’s girl as she went to our school until she was 18 and now works as a science teacher here today.

I thought that this was a really beneficial exercise as we are always told that we should be kind to each other but here it was actually demonstrated to us in real terms which made us think long and hard about the consequences of our actions. I will always think back to that lesson when I am in a situation where I am tempted to say something to someone that I may later regret.’