Coinciding with this, Morella Fisher, an ex-carer, had written to every British national newspaper about the gruelling experience of caring for her husband, Lawrence, who had suffered from early onset dementia.  She was interviewed in ‘The Observer’ and the article on 2nd December 1979 resulted in several hundred letters including one from Cora Phillips inviting Mrs Fisher to join the Steering Committee.

As the website of the Alzheimer’s Society says, ‘From then a small group of passionate and determined people who shared an ambition to make life better for carers of people living with dementia united to form the ‘Alzheimer’s Disease Society’’, with the first Steering Committee taking place on 6th November 1979.  The aim of this charity was ‘to support families and carers with information about dementia, advise on the support available through social services, ensure adequate nursing care was available in the latter stages of the condition and to promote research and educate people about dementia.’

Alzheimer’s disease affects so many families, and this milestone anniversary of the Alzheimer’s Society is a tribute to the passion and dedication of all those involved with this wonderful organization.

In my office at school there is a triptych – it is an A level Art piece by Aneae Rodriguez and happily for me, and the school, the wonderful student who created it has left it with us for now while she studies Graphic Design. I look at it all the time, I ask interview candidates, children and adults what they can see. What they describe is often very revealing of how they think and view the world.

It is a thought piece in every sense of the word. Very simply, when asked, Aneae says that it is the story of her grandmother as she developed Alzheimer’s. The charcoal and chalk drawings were done over time and chart her grandmother’s decline. In the first image she is looking at you. She faces you head on. Intelligence radiates from her but amongst the elegance of the clear lines, her mind is shown in thread, blue thread contained where it should be but with a few telltale strands creeping down towards her shoulders.

There is a world of love in this image. Kindly looking at the viewer, she draws us into a relationship with her. Here is Aneae’s grandmother but here also is everyone we have ever loved who has been diagnosed with a chronic condition. A faraway look is already there – the quiet knowledge for the person with the diagnosis that they have joined a new club, they carry something on their own now that we who love them cannot reach.

I remember first learning that my mother had cancer and then the devastating moment when she returned from hospital after her operation. She stood, unforgettably, in the kitchen. Unaccountably, she was wearing a raincoat she only ever wore to work. She stood there and in the air was the knowledge that the cancer had spread and she knew she was dying.

My mother came from a Glaswegian family of clever women. Her mother had been one of the first women to attend Glasgow University in the early 1900s where she read Mathematics. As a woman she was not allowed to sit in the lecture theatre and had to sit outside. When she told this story (which she did often) I marvelled that she learned anything at all in that manner. The tale was always told with detachment and clarity – she was fortunate to go to university and to have a family, which treasured education for women.

My grandmother passed on that objectivity and sense of justice to her daughter. As one of the first students of Sociology at Liverpool University in the 1960s, my mother used her degree to qualify as a medical social worker. From there she moved to work in Higher Education, teaching social workers and in due course validating those courses at various universities. What defines her work as transformational was that she was one those who started to set out what we now call child protection. Her stories of the clients she supported in London in the sixties and of the ambition of creating something which would codify the safeguarding of children are the stories my brother, sister and father still recount. They keep her alive for us. And in that first picture of the triptych, I see a mother and grandmother whose eyes are alive with tales and memories. How remarkable that an 18 year old should have captured that vivid sense of humanity. While I never met Aneae’s grandmother, I am gifted every day with the direct sense of her personality which the picture conveys.

In the second image, the grandmother is looking to the side. She seems rather more crumpled and stooped. She is still wearing glasses but her direct gaze has gone.  We have lost her. The threads of her mind are orange, more scattered, spilling now all over her shoulders, over her face. She is unravelling. It is exquisitely painful.

When my father-in-law was moving through the stages of dementia there was a sense of the pull of the illness and the awful discoveries we all made about this cruel disease. Amongst many things, we didn’t know that dementia was classed as a mental illness. How can dementia and Alzheimer’s be classed as mental illnesses we wondered? The term suggested, wrongly, that some counselling might help. It also cast a broader light on the crippling nature of mental illness and its effects, not just on the sufferer but also on the family who watch as memory and other intellectual functions are progressively lost. We have to look after those who care for those with mental health problems. The toll on those carers is great.

Most people who have seen a relative with dementia or Alzheimer’s will know the moments when the bizarre slippage of rationality is juxtaposed with apparent lucidity. Most of us have stories which teeter on the hilarious – people who come down dressed in clothes which are wildly inappropriate or shocking. Or stages in the early onset where the taboo filter is stripped back and extraordinary truths are spoken. We all become observers then – in my case watching in awe as my sister-in-law managed unusual conversations with humour and kindness. Our children watched their grandparent, puzzled by what was happening. As the illness advanced and constant care was required, and at meal times the adult became the child, we watched our children watching the adults. How to explain it? How to make sense of any of it?

In those early stages, there are frequently the initial alarms and excursions of the all too familiar stories of people going missing, wandering off somewhere in a city while visiting someone. Frantic calls are made to the police. There are tremendous upsets and recriminations until the loved one is found. So often I have seen one member of the family, following such an episode arriving more quickly at an awareness of the full scale of what lies ahead. While others choose not to see it. There are such tensions for families and sometimes such disasters as everyone dances around the reality of what is on the horizon.

All this and more was noticed by Aneae. Our teenagers and children look on as adults do their best. Their perspicacity in times of complexity so often holds enormous kindness – do we acknowledge this often enough? They will often tell us to “chill” – it’s not bad advice.

The word dementia is derived from the Latin meaning “out of one’s mind”. As a term for cognitive disorder it was first coined in the late eighteenth century and like many words associated with syndromes it has become a term with negative, fearful connotations. Yet before we were able to classify types of dementia and see on scans the degeneration of the brain, we used to call this madness. Different eras managed this with varying degrees of empathy. Foucault’s incredible book “On Madness” traces the history of our relationship with insanity. There have always been scapegoats in human history. For a long time lepers fitted the bill, expelled from society. In very general terms, in many ancient societies, mental decay was seen as a natural part of ageing. As such, people we would now diagnose with dementia existed within communities  – not necessarily well cared for but not excluded. Shakespeare is filled with examples of a culture which accommodated truth spoken through unreason. Then we crowned rationality king. Then we locked away anyone who spoke wildly, who felt too freely or strongly. Now we can get care at home for those with dementia or Alzheimer’s if we are lucky, but even then the carer can feel locked away, restricted, unable to get out. Do we talk enough about those who support people with long term, chronic, mental health conditions? How do we watch out for their mental health?

In schools, we are all engaged in working to support those whose lives are profoundly affected by mental illness. Those of us in touch with this professionally are constantly working out ways to make sure we include all those who are suffering. We support children with growing needs and very often we care for girls whose parents are extremely ill. We balance a duty of care to children with ways of supporting their parents. We all work towards helping families making their way towards the last image in the triptych.

In 1906, a German psychiatrist Alois Alzheimer examined the post mortem brains of people affected by dementia when they were younger. Those early post mortems showed the tangles now known as the hallmarks of the disease. How telling that Aneae reflected this in her work by using thread to show that jumble. In the final picture, the grandmother does not look at us, but she is not avoiding us. She seems at ease. Pink thread is all over her shoulders now. No longer wearing her glasses, it as though she is smiling at some interior loveliness, known now only to herself.

How much do we mind about what teenagers and children see of their grandparents declining like this? That phrase alludes to deliberate, intentional thoughtfulness. How wonderful that we have an expression where the verb “to mind” wraps up deep care with an emotional attachment. We mind children. We mind that suffering occurs. Perhaps we could be minded to listen to the children and teenagers who observe the adults around them. Aneae’s drawing and skillful playing with charcoal, chalk and thread show us what we can learn from the teenagers with whom it is a privilege to work. 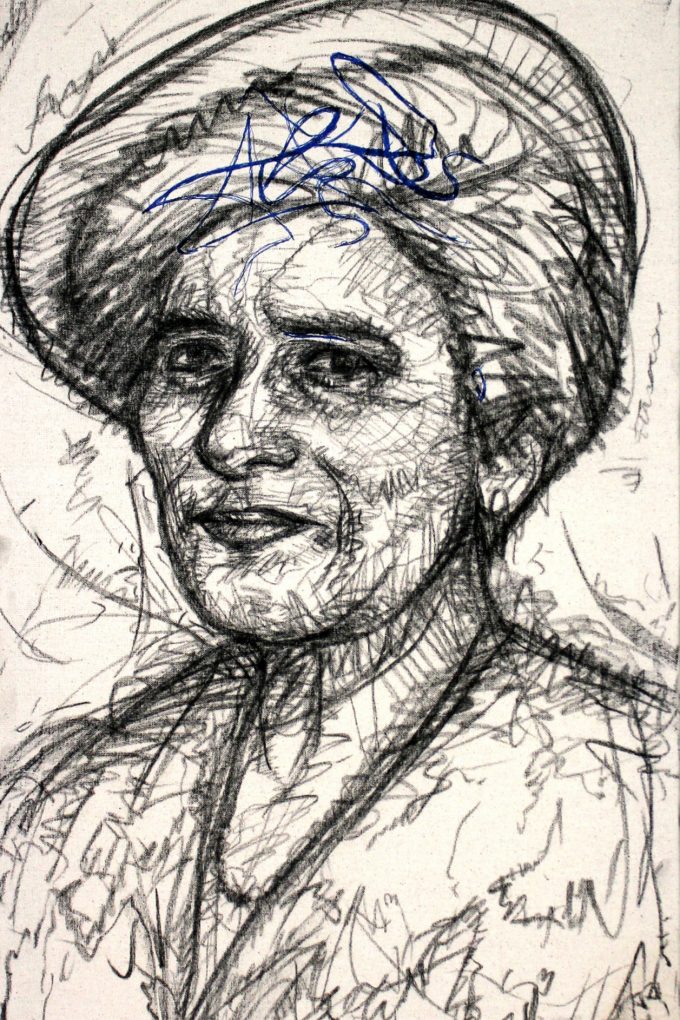 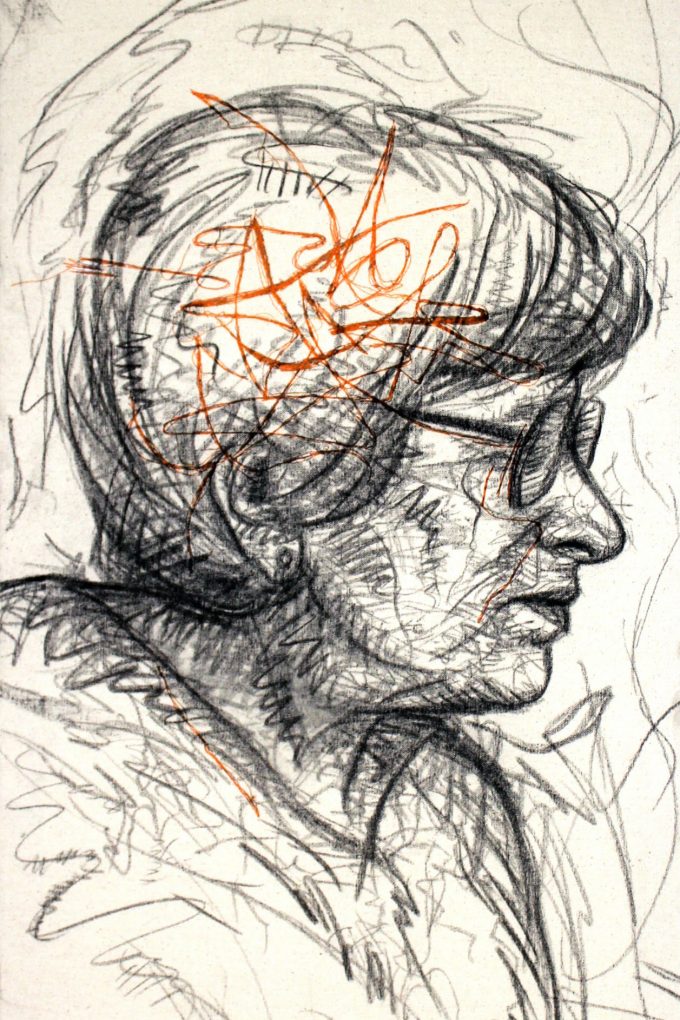 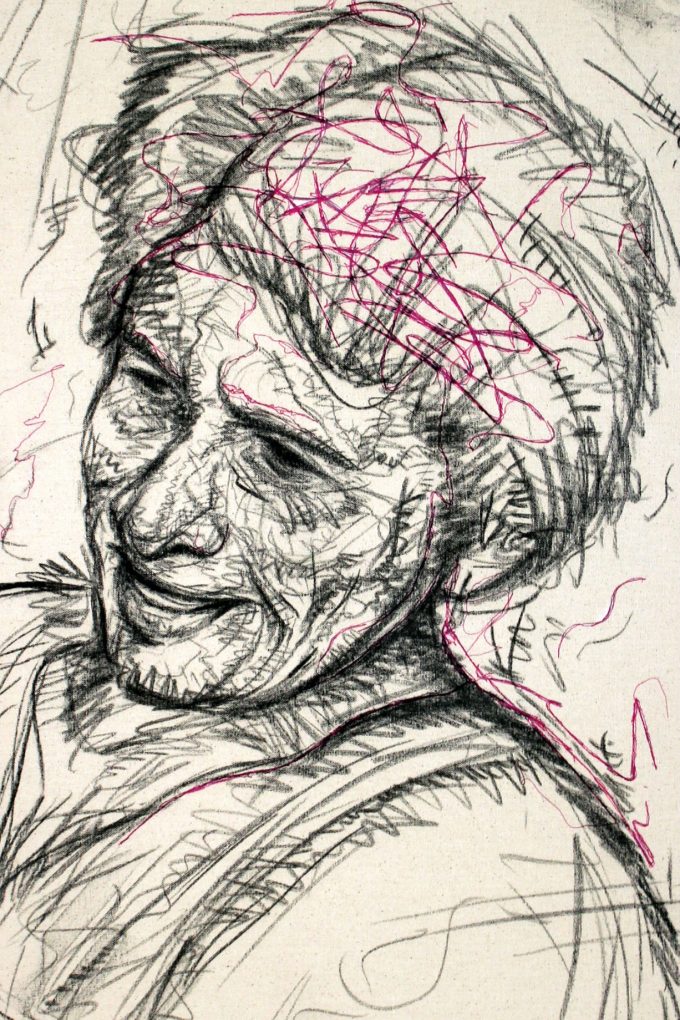 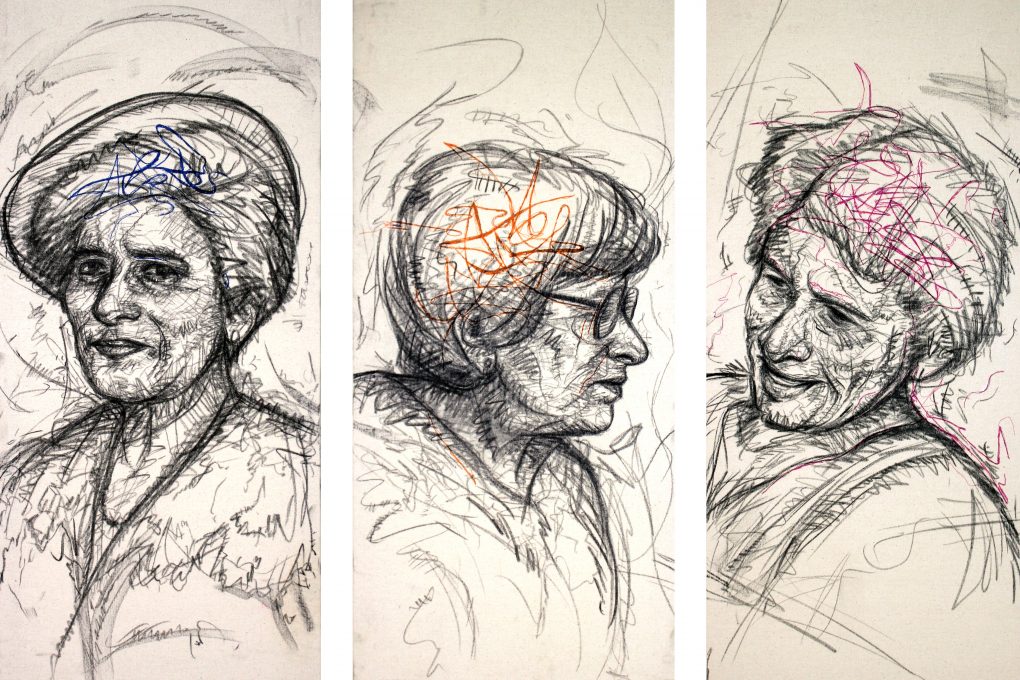