Poem of the Week.

No-one who viewed the inauguration of President Biden this week could  have been failed to be moved by the power of poet Amanda Gorman’s Inauguration Day 2021 poem, ‘The Hill We Climb’.  Although written especially for the day and speaking about the United States, there were lines that resonated with everyone around the world.   The power of poetry was never more apparent.

Mr Elder, English Department, a published and award-winning poet, here writes about how, at St Augustine’s Priory, poetry is part of our daily lives, inspiring us and helping us in these times:

‘At work we have a system of sending a Poem of The Week to all staff. I can only imagine how many of those emails remain unopened in deleted files, but I know from feedback that every now and then a poem really lands, and it makes a difference. The difference might be someone smiles at their desk on a Monday morning, or they will send a reply saying how much they liked/appreciated it, or the difference is I have a conversation with someone about a poem – someone I might not normally have much to chat about is talking to me about poetry – that’s a win! Let me declare now – the idea of doing this simple thing was not mine – but I really enjoy being part of it.

I have looked back at the poems I sent this year and I was wondering if they tell a story, perhaps a story of how I was feeling, or of bigger things. Looking at my list I think these poems say a lot about 2020. Note there are only ten poems here because I share the scheme with others in my department, plus it is a school and so poems were not sent in holiday time, or indeed, in the white heat of switching to remote learning overnight.

I take quite a bit of care over the choice of poem – there are a few guiding principles. Firstly I have to like the poem – this is my chance to impose my taste on the world – what an opportunity. The poem will not be too saccharine, too flowery or from on high.  It must be reasonably short and accessible – people have a million other things to do and 98% of the recipients are not in the English Dept. Therefore the poem has to work pretty immediately. I avoid anything too controversial – why bother with upsetting people or having to defend your choice? I try to send something most will not know by a writer they may not know. I want the poem to capture the mood of the school, the season, the state of the country or at least have a connection that goes beyond my taste.  Generally I go with one I can get on the internet – that’s me being lazy and avoiding the fuss of scanning a perfect copy etc.

The poems I sent …

Collins deceives with his light touch – there is more than you think going on in the poems. But this is accessible and bright and what we need as we struggle to enjoy January.

This would have been sent as close to the date as I could get it – the poem is a fantastic collision of two events that took place on that one day. (To say more would be unfair to those who are about to read the poem for the first time).

But These Things Also by Edward Thomas

Spring and Winter overlap – where is the join?

I sent this poem in March. It demonstrates how the list of poems ends up as a kind of diary. Little did we know what we were about to get into.

A Study of Reading Habits by Phillip Larkin

Across the country there is something called National Book Week and there is also World Book Day. Either way, this is my cheeky choice for Larkin’s last line, “Get stewed: /
Books are a load of crap.”

Here is a short and fantastic poem that is instantly accessible and yet endlessly yielding new insights. I sent this in July, as school was ending for the academic year. I said it could be Poem of The Week or Poem of The Year – and now I still think that holds.

This poem was one I heard Billy Collins read on his Poetry Broadcast – another that is deceptive in its simplicity and, of course, relevant to where we were in the Autumn. 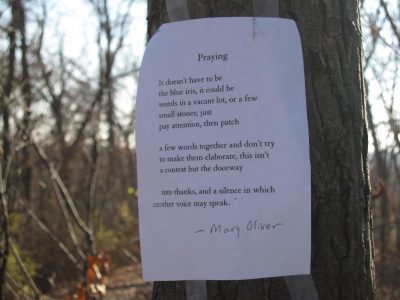 It is easy to get carried away with trying to match the poem to lofty ideas of raising the spirits of co-workers. Instead I can go with a piece like this that says “Yep, we’re all trying to get through today”. One colleague emailed in response to this asking if the choice was autobiographical. Absolutely.

Here we were in November, Remembrance day upon us. Too easy to go with Owen, Sassoon et al. So yes, I repeated Bilgere (another Billy Collins tip I picked up). Again this poem got a reaction – it really is a poem to make you think and it expands the usual parameters of Remembrance Day.

My last poem for the school year. Schools closing early (well, moving online) because of the virus and things beginning to spiral again. So a poem that embraces the cleaners of our work places.

So there it is… ten poems that say something about the year we just had. I recommend doing this at a work place – if nothing else it’s something to ponder on the journey to/from work – what shall I send next week? Let’s hope we’re sending poems that celebrate life and its wonder next year – and perhaps a poems about the joy of being able to hug each other.

All the poems mentioned here are available online – just search the poet and title.’ 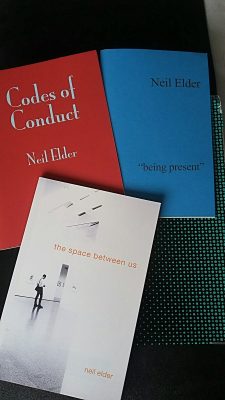 The English Department have continued in 2021 to send the staff poems to lighten and enliven their week, and we all benefit from and are grateful for their gifts to us.

We leave you with two excerpts from ‘The Hill We Climb’, a remarkable poem from a powerful young woman: