“Comparison is the Thief of Joy”: Why Careers Education is about Knowing Your Soul.

Every now and then there come moments of real satisfaction as a Head. Week in, week out I give assemblies and recently British and global events have given richly in the way of opportunities for comments on the rule of law, the constitution – what it is to live in and support a liberal democracy. Then there are gifts given by colleagues – we interviewed a few weeks ago for an internal promotion for a colleague who had applied to lead PSHEE. As it happened, an Upper IV girl was Head for the day and her final act as Head was to open the interviews. The question was around what theme would interest the candidate – along the lines of Internet Safety Day or Road Safety week. The answer delighted us all: “I am a great believer in the saying that comparison is the thief of joy”.

We need strong appointments in schools to roles which can become bogged down in regulatory requirements, or pressing needs of the day – we absolutely must prevent radicalisation of young people and we must hold Safer Internet Days but our work is more profound than one-off events. Our job as educators is in the sacred task of formation and it is this task, which guides our PSHEE and Careers programmes. All of this work is about enabling self- knowledge, identifying the influences on us not to mention learning from key moments of transition – why we made the choices we did, whether they were wise and what we might undo or redo given another chance.

We duly made our PSHEE appointment and at assembly I announced our colleague’s success. I quoted her. I had found her image arresting and spine tingling. 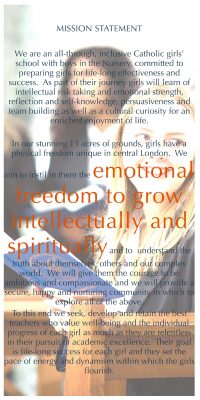 Comparison with others robs us of joy if we spend too much time considering others who are better than us. The pain caused by this is something we have to counter daily with girls in particular. Most girls, if pressed, will tell you they are paralysed in some way by the belief that others are cleverer, more beautiful, funnier, better at Art, Science, Sport, Maths and all that singing and dancing. At St Augustine’s we rejoice that girls on the whole don’t feel the need to wear masses of makeup but we know that they do worry about how they look, seem, are when set against others.

By the same token, comparing ourselves too favourably against others can lead to arrogance, an unattractive sense of superiority. Thus enabling girls to know themselves and value their own gifts is vital not only for mental health but also for long-term success in the work place and in relationships. When we say we prepare girls for life-long effectiveness we are not just talking about shattering glass ceilings, we are also helping them to be aware of the effect they have on others, to know how they respond to a rupture of some kind and how to recover. I would like to think that when they get married our girls would stay married because the cost of break up is so great. We often talk about what it means to be ambitious, but we also address what it is like to want to blend that with having children. The comments, which emerged during the Tory leadership contest, revealed just how close to the surface attitudes to motherhood are. Worse, the online misogyny currently directed at women in politics is testimony to the level of strength girls will need if they enter the public arena. 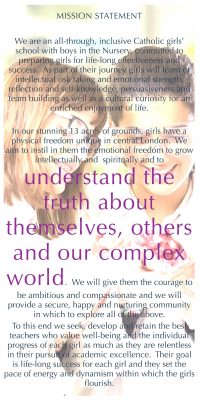 There is much talk at present in the media about truth and in that context charges of hypocrisy are emerging: interestingly most piercingly about women politicians. Trump is found to be a liar whereas Clinton is judged a hypocrite. Theresa May faces the same sting. Both women would do well not to compare themselves with the treatment men in their sphere receive because they will not find it equal. At assemblies I urge the girls to become known for telling the truth, to have the reputation for kindness, for saying the same things in front of someone as behind their back: in short, to make sure that they are themselves through and through. They need wise hearts for that is where their treasure lies.

A thief is nifty, an Aladdin “street rat”, swift with an eye for the main chance. Shakespeare wrote that reputation is a bauble. We need to help people of all ages to maintain an integrated public image, which resonates with their private self. Otherwise it is too fragile. We need to help girls be strong and recognisably themselves whether at peace or in times of pressure. It was Iago who said that reputation was a bauble, of course, and he is the ultimate thief of joy, hypocrite, and Janus figure. Our job in schools is to help girls guard against the thief who would turn their joy to dust. We need to prepare them to be thoughtful travellers who are open to love, hope and success yet well protected at the same time. A deep-rooted sense of self is vital.

And the assembly which provoked this reflection? For me there was a profound joy that a girl much, much later found me and quietly thanked me for the quotation – it had moved and changed her. Never underestimate the power of goodness and hope; or the importance of challenging unhealthy patterns of thought; or the surprising joy of a career as a Headteacher. 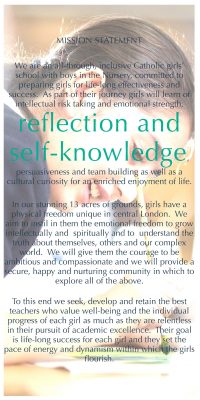