Last academic year we wrote about how Ms de Lahitte, Spanish teacher in the Modern Languages Department, runs an initiative to support Fundación Anpuy, an organisation providing educational and social opportunities for children, adolescents and young people from deprived backgrounds.

We are supporting the education of Nicolás Aramayo who attends the school, ‘Escuela Nicolás Avellaneda’ in the city of Salta, in the north of Argentina.  Various fundraising events were organised by Ms de Lahitte and her pupils last year and they were delighted by the response to the Latin American handcraft sale and the film nights.

Nico recently celebrated his tenth birthday and Fundación Anpuy sent us a photograph of Nico holding one of our St Augustine’s Priory hippos which some of our students had sent him, together with a short video greeting him in Spanish and some stationery.

Ms de Lahitte writes, ‘I am told that he was really happy that we remembered him on his day and that he really enjoyed the greetings in Spanish!’ 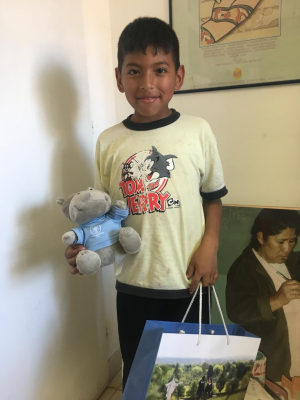